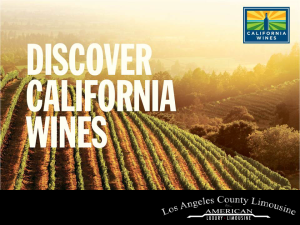 We have become the industry leader in limo wine tours.  We take great pride in our fleet of limousines and our vast knowledge of California’s wine regions. If you want to book a LA wine tour, Santa Ynez wine tour, Santa Barbara wine tour, Malibu wine tour or Temecula wine tour, we are the best in the area.  Our wine tour specialists can help you plan a day to remember.  A luxury limo is the best way to visit wine country! Give us a call, and sit back and let us do the rest! Do you ever wonder why California has such great wines?

California Wine traces its history back to 1769 and the first Spanish Missions, which would plant the first Californian vineyards in what is now Santa Barbara County and use the wine for their Roman-Catholic Mass. In 2015, there are more than 3,000 wineries across the State of California, which account for the production of 89 percent of American-made wine. If the state were a separate nation, it would have been the 4th largest global wine-producer, only surpassed by the Mediterranean countries of Italy, France, and Spain. California produced 620 million gallons of wine in 2014, according to the Wine Institute, and the California wine industry is an $18 billion industry in terms of retail sales.

An estimated twenty million people visit the state’s wineries each year, many through guided limousine wine tours, and the wine industry accounts for 300,000 California-based jobs. Of the 750 million gallons of U.S.-made wine produced in 2014, Californians consumed more than a fifth of all the wine consumed in America. Much of California wine is exported to European nations, where the wine consumption is at minimum twice as much as in the United States. While America has an annual wine consumption of only 11 bottles per person a

year, Britain has an annual wine consumption of more than 22 bottles per person per year. Germans consume three times more wine than Americans, and the French a whopping six times more. That is 66 wine-bottles per French person annually! Italy and the Vatican rate even higher than France, while Norwegians, Slovaks, Danes, Poles, Swedes, Finns, Dutch, Swiss, and so many other Europeans consume at minimum double the amount of wine per year as the average American. The wine industry is an integral part of the social- and cultural fabric of California, and both the number of wineries, vineyards, and wine consumption per capita is steadily increasing for every year in the Golden State.

While many assume that Northern California’s Sonoma- and Napa counties dominate the Californian wine industry, even though the two counties combined in reality account for less than a fifth of California’s wine-grape vineyards. Retaining old- and gaining new customers is a tough balancing act for the contemporary California-wineries. Some want to lure new premium costumer consumers into the fold by promoting an entry to an elite Wine Country lifestyle and serve the most exclusive wines produced in the specific region. But as wineries push for pricey wines and its pretensions on wine-newbies, they risk scaring uninitiated customers away all together. While some wineries offer nearly complimentary wine-tastings, others charge up to a $50 tasting fee. Make sure to ask our limo wine tour specialists about information and pricing on various wineries. California’s more than 480,000 acres of planted

vineyards are located throughout the state, with famous regions such as Napa County, Sonoma County and Mendocino County in Northern California, as well as regions such as Santa Barbara County, Malibu Canyons, Santa Maria Valley and Santa Ynez Valley in Southern California. During a wine competition entitled “Judgment of Paris” in 1976, California wines rated the best in each of the categories. The shockwave of the Europeans being beaten at home at their own game reverberated around the world and was an important turning point for California wines’ popularity worldwide. The seven most consumed wine grapes produced in California are Cabernet Sauvignon, Chardonnay, Merlot, Pinot noir, Sauvignon blanc, Syrah, and Zinfandel.

All wine consumed in the America is drunk by only one-fifth of the U.S. population. The equivalent number is substantially higher in California, in which wine-consumption accounts for a fifth of all wine consumed in the U.S. There are several factors to why Californians are overrepresented among Americans in wine-consumption as well as wine-production. The number one factor might be that the wine legacy is higher in Europe and California, as opposed to other parts of the United States. California wine has only been made in commercial quantities in California for about 150 years, while in Southern Europe it has been an important cultural drink since the times of the Roman Empire. Moreover, Americans of non-European ancestry, such as African-Americans, Asian-Americans, and Americans of Hispanic origins tend to have little previous exposure to wines.

While wine is a culinary culture in Western Europe enjoyed for centuries, Americans in general tend to view wine solely as a special-occasion drink, a drink to be enjoyed for a special meal or a special occasion, rather than consumed every day. While it is correct that top-notch quality wine might be too costly for most people to be enjoying a bottle day, keep in mind that it can be stored and remain fresh for as much as five days. Most people will save their high-end exclusive and more expensive wines for a special occasion, and rather drink a less classy house wine for everyday meals, which still tastes great but at a price far more inviting for an everyday drink. Chardonnay, merlot, cabernet sauvignon, and white zinfandel accounted for more than half of the wines sold in California in 2012. The Oscar winning movie Sideways (2004), a comedy-drama that follows two bachelors on a voyage of self-discovery through the Santa Barbara County Wine Country, did wonders for the sales of Santa Barbara pinot noir, as well as other types of wines from Santa Barbara County, including wines of the city of Santa Barbara, the Santa Ynez Valley, Los Olivos, Santa Maria Valley, Buellton, Ballard, and Solvang.

If you are interested in learning more about California wines, be sure to give Los Angeles County Limousine a call at (866) 319-LIMO, shoot us an e-mail, or request a quote online.  Book one of our LA limo wine tours to any of the Southern California wine regions.  There is no better way to tour wine country than in a luxury limo. Our LA limo services have been an industry leader in limo wine tours and have a large fleet of vehicles to choose from.  Need just a sedan? We got you covered! A stretch limo? No Problem! How about a party bus? We can provide a limo wine tour to any size group that you have in mind.